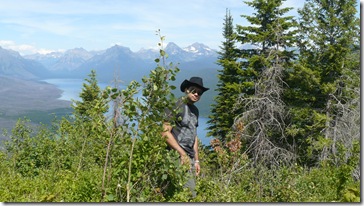 After spending the weekend down in Glacier National Park, I am decidedly sore but contented. I have made many trips to the Rockies over the year, and weather is never an element one can plan for; I have certainly seen it go both ways. I am very grateful to say that for this particular trip, the weather was excellent. We had a bit of rain, but not until we were driving back up after finishing our weekend. Thankfully, the rest of the trip was graced with sunny clear skies and and pleasant temperatures.

My roommate and I made good use of our good fortune by leaving no stone of the park unturned over our short three day excursion. We did numerous hiking trails, the longest being our first, up to the top of the Apgar Lookout where it was surprisingly well vegetated. In fact, there were a bit too many flies for comfort. Thankfully, there is a radio tower maintenance building with a deck accessible to the public that we were able to escape to — that and a very healthy portion of DEET. We also took the trail out to Hidden Lake located at the top of Logan Pass. The trail might have been a bit easier had half of it not been covered with a very well beat down and slightly melted snow-pack. Climbing uphill on especially slippery snow was quite a challenge after previously doing an 1860 feet climb. The view back at the lake is stunning, however, with the lookout high above a massive valley with a snow-touched lake.

It is the first time that I have been out camping in the mountains for a couple of years, Thankfully, my skills at building a suitable camp fire have not degraded much over the years. I got two roaring pyramids on my first attempts, which we enjoyed well into the night. Cooking ‘attempts’ actually went shockingly well. My roommate pulled off a very nicely cooked salmon fillet in what was a very dark campground. Fortunately for me, he didn't want to have all of it.

I am now contemplating what will hopefully be a deep sleep, followed by another full week at the office.