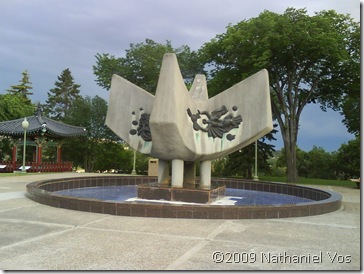 When out running, I often like to pick out a different route to head out on to keep the sense of adventure and discovery higher. I figure it also doesn’t hurt the sense of accomplishment when you get out in a new area. It’s a good reward to oneself when the further you run, the more you can open up in the way of new areas previously uncharted. I have learned much about the neighborhood that I live in simply by running through various areas of it. On Monday, I was running by the Alberta Provincial museum, and wondered if I would find anything by running around it. As is turns out, it’s rather nicely groomed, and there is access near the rear to the river valley trail system. After shooting the picture above, I ran down a rather steep hill and found a paved path running alongside the North Saskatchewan river. It’s gorgeous down there, and you could honestly believe while down there that you were no longer in the middle of a metropolitan city at all. Needless to say, I’ll be running a bit more down there now as I try to tease out where all of the different paths lead.

It has been a tumultuous year thus far in many ways. From large scale American structural changes, to more personal changes, life feels like it’s racing past. I have watched with no small amount of concern as western debt levels rise to rather alarming percentages of GDP, and I can’t help but wonder when the hammer is going to drop. Nevertheless, I am trying to proceed with my plans, which includes paying back my rather large student debt. Slowly, but surely, I am making progress in that area. I figure if the country has to be in debt, I might well do my best to set a good example. Heh.

One of the local theatres by me is running a summer promotion that involves cheap tickets, something always worth getting excited about, so I am going to catch some escapist summer blockbuster. After all, that’s what summer promises best — escape!