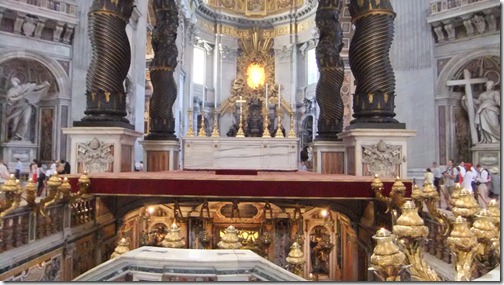 Being at the Tomb of the Apostle is something of an experience. It’s hard to imagine that Peter himself was buried at this spot, and harder still to fathom the absolutely massive basilica that was built over it. One really wonders what the poor fisherman from Galilee would have thought of the edifice and of the empire that was built out of his Apostolic authority. It is the largest Christian church in the world, holding around 60,000 people, and I really felt that wandering around in there. It is also unbelievably ornate, with statues everywhere carved out of marble, including Michelangelo's Pietà.

That statue is an absolute masterpiece, showing the artist’s truly impressive understanding of the human body and expression. It’s a shame that I could only take a picture of it behind glass because some nutter went at it with a bat in the ‘70s.

My appreciation of the artistic genius of Michelangelo was only realized through this most recent trip. Before, my thoughts on his work barely extended past a simple compendium of his more famous works, and that he was worthy enough to be made a Ninja Turtle. But it is quite another matter entirely to see these works in person where they are truly life-size and where the intricacies of the work become plainly apparent, particularly compared to the work of his contemporaries and predecessors. The Sistine Chapel left me particularly in awe. It’s hard to fathom that the artist completed that singularly massive and intricate work without assistance over a several year period.

My only disappointment was the regrettably short time that I had to look around and appreciate the sights before me. There’s just so much ground to cover, and so little time with which to accomplish it. Hopefully someday I’ll get a chance to see it again.