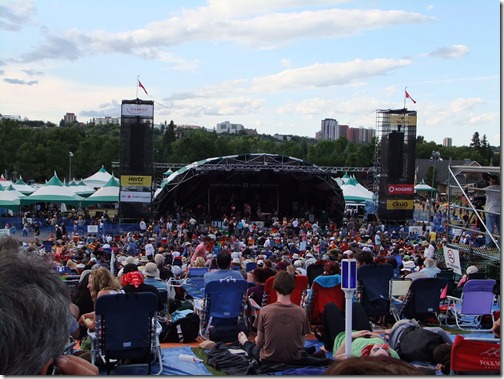 I have never actually attended a music festival, much less the Edmonton Folk Festival, which is somewhat surprising, as they’re relatively popular in Alberta, and I love music. Nevertheless, I think that I started on a great note. The festival had some great performances, and I put a lot of hours in there. I roughly figure between 25 – 26 hours of solid music for the 4-day weekend event, and I thoroughly enjoyed all of it. It was also a chance to sample some good food and hang out with friends.

I made what is called a “tarp run” on Saturday morning. The festival is all first-come first-served for the purposes of seating, and because they don’t wish to disturb the neighbourhood with all-night line-ups, they do a lottery. You arrive at 6:45 AM and they pass out a band name and a number once you’ve show a ticket or wristband for the day. At 7:30, they randomly pick a band, and that’s who gets to go in and place their tarps first, and so on and so forth. The obvious way to get a good seat is to show up with twenty people, and try to collect that many band names with no duplicates. We did that, and we had 17 names on Saturday morning, which gave the group 1st,3rd,4th,5th and 6th choices. I showed up for the name, and then I took the bus back to my condo to go back to bed. It did get us a good location, however, and I really enjoyed it later that night when we listened to Brandi Carlile.