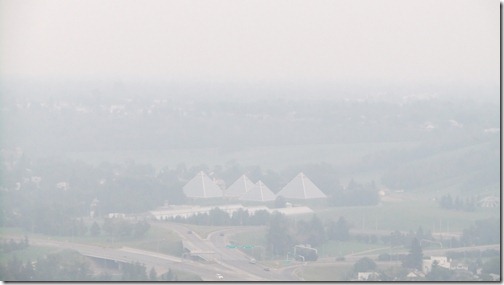 It’s odd to walk out of the door on a fine summer morning and gag, because it feels like you’ve fallen into an ashtray. I have never seen anything quite like it, and it’s bizarre because of how fast normal disturbances blow through the area. Edmonton is, after all, on the prairies and normally has unobstructed wind flow. It’s now starting to get better, but at one point it was strong enough to  bring on a decent headache. It’s hard to fathom the size of a fire that could push that much smoke hundreds of kilometres into another province (BC, which is having the worst forest fires in a decade). The chief medical officer actually had to issue a health advisory due to the high amount of particular matter in the air.

I am trying to figure out how best to enjoy the waning weeks of the summer, and I still really want to squeeze in a camping trip. I suppose I have at least one smashing way to end the summer — a trip to the Okanagan in BC. Get a chance to swim in the lakes, do some hiking, and see some old friends. Probably can’t ask for much more than that. I just hope there isn’t a fire.