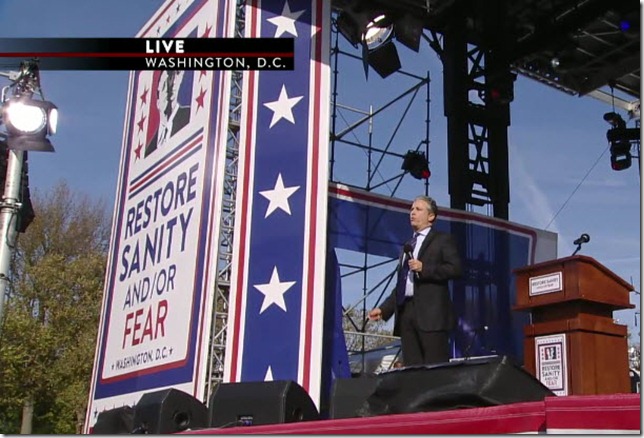 I had been looking forward to seeing Jon Stewart’s rally for several weeks now, since he first announced it on the Daily Show. For all of America’s vexing problems, the single solution offered by Washington is rhetoric and fear. Reasonable debate and sane political discourse seem about as far removed from American politics as the Lions are from capturing a Superbowl title. Sure, it’s within the realm of possibilities, but it doesn’t seem likely within my lifetime. And it’s frustrating because it’s difficult to find any solutions when the participants seem solely committed to talking points, chicanery, and earmarks.

The rally was indeed amusing, but I found the brief “keynote” given by Jon Stewart at the end particularly interesting and hopeful — quite a surprise, I might add. As he pointed out, people work together and accomplish life, as it were, “every damned day”, just seemingly not on cable television or in Washington. He used the metaphor of traffic proceeding through a tunnel, everybody gradually moving forward, giving room one at a time, regardless of whatever is on their bumper stickers.

I am not entirely sure what to expect for the midterms, but it’s hard not to be a bit cynical and suppose that the day after will be business as usual in Washington. There is more money that ever now flooding into American politics, and it’s becoming more difficult by the day to have any faith in the process. Still, I have to believe that in the end, justice will prevail. If not now, then at the end of all things. Until then, I will do my best, limited in effect though that is, to aid the effort.