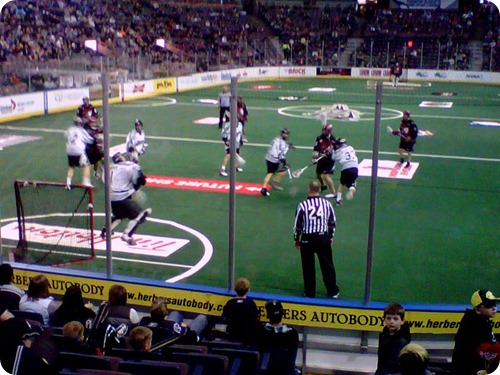 Despite the fact that Lacrosse actually is the Canadian national game, I have never actually seen a game. I went to correct that Saturday evening at the Edmonton Rush v. the Colorado Mammoth, and it was quite an interesting experience. It was rather cheesy in the pageantry, though in a good way. It’s a decidedly odd experience to watch a game with no conception of the rules whatsoever. It looked like complete chaos, replete with a healthy amount of violence. I am still not sure what exactly merits a penalty, but at least a full bore fight resulted in a 10 minute penalty. Clearly there are some limits. The result? Well, they lost, but at least they did so only after we’d seen multiple audience mini-games, including a wing eating contest, little league games, and a scoring challenge. It’s sure a lot cheaper than a hockey game and they really cater to the fans.

I am also delighted to say that I went to that game in daylight. It’s blessedly getting lighter every day, and I have actually been able to make recent use of my sunglasses. For the first time in many months, I am looking forward to the prospect of going camping in the mountains and hiking in the river valley. The snow is still melting, unbelievably. I feel like going on a road trip.