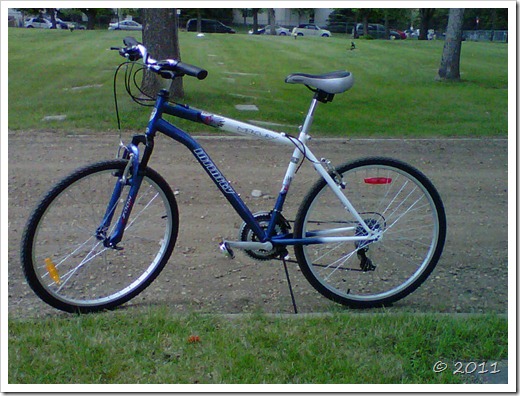 There are few things better than a summer long weekend accompanied with beer battered brats cooked on a grill and corn on the cob slathered with salt and butter. Pair that with a balmy sunny evening, and it’s a good recipe for relaxing bliss. It takes a small eternity for winter in Edmonton to end, but when it does, we are rewarded with an above average summer, with exceptionally long daylight hours and moderate temperatures due to our high latitude. I have high hopes of taking advantage of that while it lasts.

The bike featured above I actually won in a draw at work at the end of last week. I was shocked, actually, when the person called me on my office line early in the morning. I thought perhaps it was a telemarketer/scammer, but was proved wrong when I stopped off to pick it up a few hours later. I took it out on Saturday for a pleasant ride, though tarnished by the appallingly poor shape that I am in after this winter. It’s going to have to be a priority over the next few weeks to shed a few winter pounds.