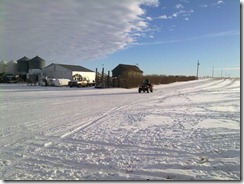 It is on some level difficult to believe that it’s already 2010. Which also of course means that it’s January again. It’s hard to disguise a a certain amount of distaste for a month that is punctuated by bouts of bone-chilling cold, incessant darkness, and a certain level of tedium. It’s hard not to spend a certain, more than minimal amount of time, fantasizing about warmer climes. Tahiti sounds like a fantastic place to spend January.

It is a brand new decade. Seems like just yesterday that we were collectively terrified about Y2K and waiting with anticipation the dawn of another thousand years. And perhaps more importantly, it’s been a decade, a critically important decade, of my life. I want to say that it’s been a momentous one. And to some extent, so that I can plan for the next one, it’s wise to take stock of the previous one. I completed high school, travelled to Central America, South America, completed my degree, obtained fulltime professional employment, and moved to another country in another region. I certainly would like to continue on that pace going forward, which I think is going to be a bit more difficult to maintain. Certainly, a part of that is due to some of the unpleasantness endured to achieve those milestones.

In any case, I enter this decade with healthy amount of hope and anticipation for the future. I have think I have answered for myself some of the major existential conflicts that so afflict youth, and I have a lot more confidence in handling the challenges of the years to come.