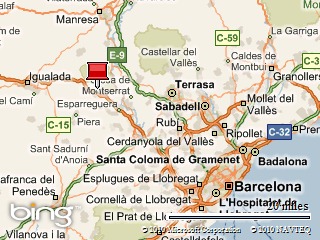 It’s hard to overstate the beauty of Montserrat and the mountain monastery and cathedral that were built at the top. It’s truly a stunning geological formation that is really nothing like anything else I have ever seen before. I felt immensely privileged just to be there, which is something of an experience. Besides the obvious trans-Atlantic flight, the monastery is located at a rather high altitude and requires either a rack-line train or a cable car to reach it. For the curious, a rack-line train basically has an extra rail that the train uses for grip. I would up taking the train up there, largely because I had a discount for that method. It’s quite something heading up such a grade, winding around the mountains.

I actually missed the children’s choir (possibly the oldest in Europe), by about 15 minutes. I really didn’t have the money for tickets anyway, but I was rather intrigued. Instead, I wandered around for a bit to get a lay of the land and then bought a bottle of water and headed for the highest point in Montserrat — a place called Sant Jeroni at 1236 m above sea level. The actual altitude is not nearly so impressive as the near vertical drop off of that point to the plain below. It’s awe-inspiring and not for the faint of heart. Altitudes are of course all relative, and this point is really higher than anything else in the region. Looking north, there is a fairly good view of the Pyrenées and of course the surrounding shorter mountains.

The area is also known for a large number of hermitages and religious sites that have been inhabited for hundreds of years. The actual monastery is still in use, but the majority of the sites are now abandoned. Still, it’s amazing to see these truly sites and realize that either hermits or small monastic communities were there for hundreds of years. Indeed, in one case, a community had cut out a living space directly into the side of the cliff and a baptismal font was still there, complete with water. I doubt it has been used in quite some time, but it’s surreal to think that people carved out an existence there. It’s not a very wide walkway and it’s quite a fall to the rock below. I spent the day hiking between a large number of those structures and sites and while I was rather exhausted towards the end of the day, I firmly believe it was one of the highlights of my trip.